Algorithm and program Flowchart are terms I believe any programmer that you’re probably already familiar with.

Have you ever taken a note or patch of paper to write down some steps or approach you intend using to create a program? Well that’s practically an “Algorithm”.

An algorithm can simply be defined as a written step-by-step approach you have developed to help you develop a program that would successful tackle (solve) a given problem.

However, we are not concerned much with algorithms in this post. I am basically just using it an an introduction to what flowcharts are, because in most cases they are interconnected.

A Flowchart can be defined as pictorial, diagrammatic or graphical visual representation of an algorithm — i.e. the process or the step-by-step solution of the problem. Take a look at the photo below. 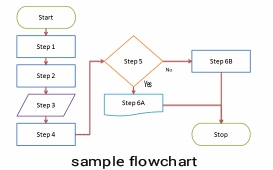 Normally, as a programmer, you are expected to make use of algorithms and flowcharts to a certain level when you are about to develop a program. It make programming a lot easier and organized.

Flowcharts help a user to have a better visual concept or idea of what is being done and thereby help understand a process, and perhaps also find flaws, bottlenecks, and other less-obvious features within it.

To successfully draw up a program flowchart, we have to employ the use of certain shapes that we call flowchart symbols. There are many different types of flowcharts symbols, and each type has its own predefined shapes and notational conventions.

This post is an overview of the basic flowchart symbols that you are most likely going to use when drawing program flowcharts and process flows, and their proposed use in communicating the structure of a well-developed computer program.

The following are 21 flowchart symbols used in computer programming:

A. Branching or Control Symbols

The terminal symbol marks the starting or ending point of the flowchart. It usually contains the word “Start” or “End.” It’s represented as circles, ovals, stadiums or rounded (fillet) rectangles.

It is a pointed arrow linking two symbols showing that control passes to the symbol being pointed. It defines the pathway of the flowchart. The line for the arrow can be solid or dashed.

This symbol is diamond (rhombus) shaped. It is a decision or branching point showing where a decision is necessary, commonly a Yes/No question or True/False test with two arrows coming out of it, usually from the bottom point and right point, for either response. (The arrows should always be labeled.)

This symbol is a circle, showing where multiple control flows converge in a single exit flow. It will have more than one arrows coming into it, but only one arrow going out. 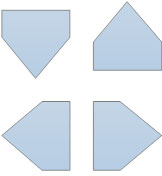 This homeplate-shaped pentagon symbol indicates that the process continues off page – another page or flowchart.

Indicates a point in the flowchart where multiple branches converge back into a single process.

Indicates a step where two or more sub-lists or sub-processes become one.

This rectangular symbol is used to illustrate a process, action or an operation being carried out. E.g. A formula for calculating a mathematical problem.

This symbol shows a set of steps that combine to create a sub-process that is defined elsewhere, often on another page or separate flowchart of the same drawing. This symbol takes two names – ‘Subroutine’ or ‘Predefined Process’. It’s a “subroutine” if used in a software program flowchart which allows you to write one subroutine and call it as often as you like from anywhere in the code. While it’s a “Predefined Process” if the flowchart for the predefined process has to be already drawn, and you should reference the flowchart for more information.

This symbol is a hexagon. It can also be called initialization. It represents a set-up to another step in the process. It shows operations which have no effect other than preparing a value for a subsequent conditional or decision step. Alternatively, it is used to replace the Decision Shape in the case of conditional looping.

Indicates a step that organizes a list of items into a sequence or sets based on some pre-determined criteria.

This symbol represents a waiting process.

This parallelogram shaped symbol, often referred to as the I/O shape, involves receiving data and displaying processed data. A flowchart can only move from input to output and not vice versa.

This symbol is a rectangle with a wave-like base. It represents printed document(s) or report(s).

Represents a step where a user is prompted to enter information manually.

This is a general storage symbol indicating a step where data gets stored. It indicates that information is coming into the process from outside, or leaving the process.

This symbol indicates a list of information with a standard structure that allows for searching and sorting.

This symbol shows data stored which can be accessed directly. It represents a computer’s hard drive.

This symbol often referred to as the magnetic core memory of early computers; or the random access memory (RAM) depicts that information was stored in memory as opposed to on a file. It is normally used when making software design flowcharts.

This symbol takes the shape of a reel of tape. It represents information stored in a sequence, such as data on a magnetic tape.

So there you have it, 21 flowchart symbols and their usage. The frequently used of these symbols includes Terminal, Flow line, Input/Output, Process, and Decision. Most of the other symbols indicated here are for use in very specific applications, such as a data flow diagram used for computer programming. 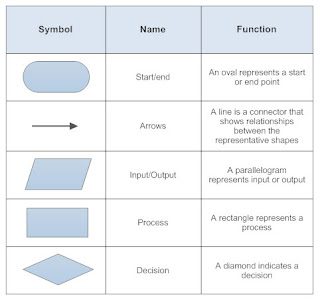 However, If more than the most basic flowchart symbols is gonna appear in your diagram, it is good practice to include a legend or symbol key.

Ready to work with us?

Please fill the form below and we will get back to you.